Right so it’s lunch time and I was sitting here eating my bento and browsing the net when I stumbled upon 2 exhibits that kinda ruffled my fur as it were.

The first one is called “Head On” by Cai Guo-Qiang. 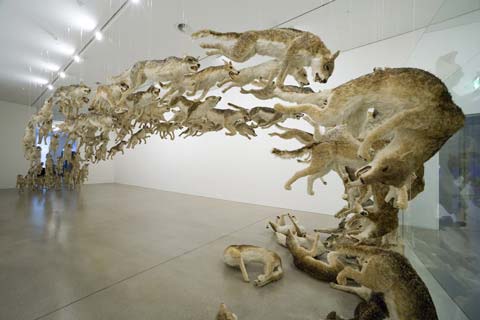 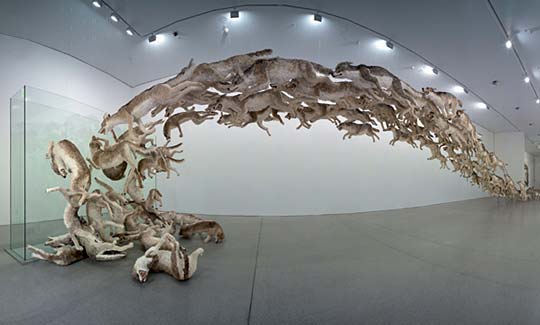 It is quite literally wolves in sheep’s clothing.

I quote: “ The wolves were produced in Quanzhou, China, from January to June of 2006. The commissioned local workshop in Cai’s hometown specializes in manufacturing remarkable, life-sized replicas of animals. First, small clay models were created as movement studies, out of which Cai subsequently developed Head On’s artist editions of cast resin wolves. However, the realistic and lifelike 99 wolves that grew out of these models and drawings possess no literal remnants of wolves: they are fabricated from painted sheepskins and stuffed with hay and metal wires, with plastic lending contour to their faces and marbles for eyes. ” (source)

Ok aesthetically speaking it’s a cool exhibit. I’m even down with the artist’s intended meaning. AND I get that they’re all happy that no wolves were harmed in the producing of this piece. But that I don’t get is how they justify the sheep?

What? Because they’re edible it’s ok to slaughter 99 sheep in the name of Art?

The second one, Apples as pixels 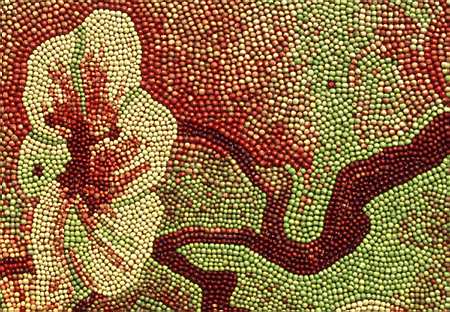 (I couldn’t find the original source for this one so if anyone knows of it, let me know.)

Ok sure, it’s beautiful, probably fairly original and all, but what the hell were they thinking. I mean first off, what an absolutely senseless waste of food. I dunno who thought it was a good idea to strip the fields of its produce and slap em on walls for decoration instead, of oh I dunno, maybe feeding the homeless or selling them and then feeding the homeless with the profit money.

I mean if that fact alone doesn’t bother you, think for moment…

what happens when those things start rotting off buildings?

Hmm? Not a pretty picture anymore now is it?

I dunno, in the infamous words of William Shatner I just “can’t get behind that”

Search through the archives